Christopher Clark and his wife Shirley moved out of west London and into the Buckinghamshire countryside thirty five years ago. Buying a property with approx. 3 acres of land meant that a ride on mower was needed. Not familiar with ride on mowers at that time, he did some research and decided that Countax was the obvious choice. He thought Countax ride-ons certainly looked the part!

After purchasing a K14 from Red Rose in Aylesbury, Chris began tidying the somewhat overgrown 3 acres of grass he now owned. After a couple of teething problems with the original 2 blade cutting deck, a new 3 blade deck was supplied by Countax and this was a lot more capable of cutting the 14 inches of wet or dry grass.

“What I like most about owning the Countax K14 is the variety of jobs it can be used for, it’s far more than just a lawn mower. It is also enjoyable to use and extremely reliable. Despite being kept outside in a makeshift shelter 12 months of the year for the first 20 years of its life, it has not deteriorated like many other ride-ons I see. Even now after thirty years, the only item I have had to replace is the cutting deck. It is still on the original tyres! The seat is a little worse for wear now but considering the use it has had, it has every right to be.

When I purchased the K14 I also bought the trailer and brush/collector attachments. These have proved extremely useful, especially the trailer which is capable of moving very heavy loads around the property and was also used for collecting bales of hay. The cutting deck is capable of producing a very impressive striped lawn finish, but also cutting through ‘woody’ growth on the perimeters of fields with ease. I make sure I do have the blades sharpened once a year.

Just reflecting on my purchase as I pen my thoughts for Countax Life, I now live near the coast in Cornwall (notorious for rusting even the best prepared cars) and yet if I spent some time cleaning it as one would a car it would still look almost new after 30 years – there has been very little deterioration. I would be lost without my Countax, our 0.75 acre lawn takes just twenty enjoyable minutes to trim. I think the only change I am considering is to swap the rear tyres for chevrons, as our land slopes and in very wet weather the old original tyres are beginning to struggle.

I have seen many different makes of ride on mowers and used several others for an archery field in the past, but they don’t compare to Countax. The bad news for Countax is that I won’t be buying a new ride on mower – I don’t need one! The good news is that if I ever meet someone who needs a new ride on, I would only recommend a Countax based on my experience”. 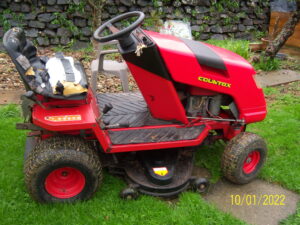 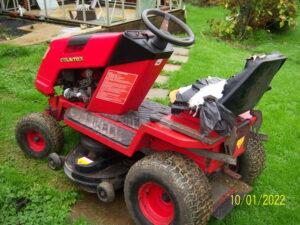 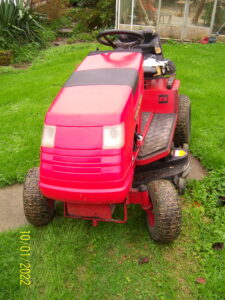