There have been many newspaper headlines recently regarding E10 fuel, but many stories have been confusing at best and sometimes contradicting in their advice. In this article, we try to unstitch the fact from the myth and clearly explain what E10 is and whether or not it can affect the operation of your Countax. As with all technical aspects of your tractor, we strongly recommend seeking out the advice and support of your local Countax dealer. Not only are they very friendly people, but they are also experts in what they do and should be able to answer any specific questions you may have.

E10 fuel is essentially petrol, or rather a blend of petrol that has now become widely available for sale from forecourts across the United Kingdom. To understand it in more detail, we first need to break the name down into its constituent parts. Firstly, the letter ‘E’ stands for Ethanol. Ethanol is a form of alcohol and, just like with your favourite tipple, it has been produced by fermenting grains and plants to turn the naturally occurring sugars into high concentration alcohol.

An internal combustion engine, such as that found in your petrol-powered car or garden tractor, works by mixing fuel with air, then igniting the mixture to create a small controlled explosion. It’s this explosion that it used to move a piston up and down and which eventually gets trans 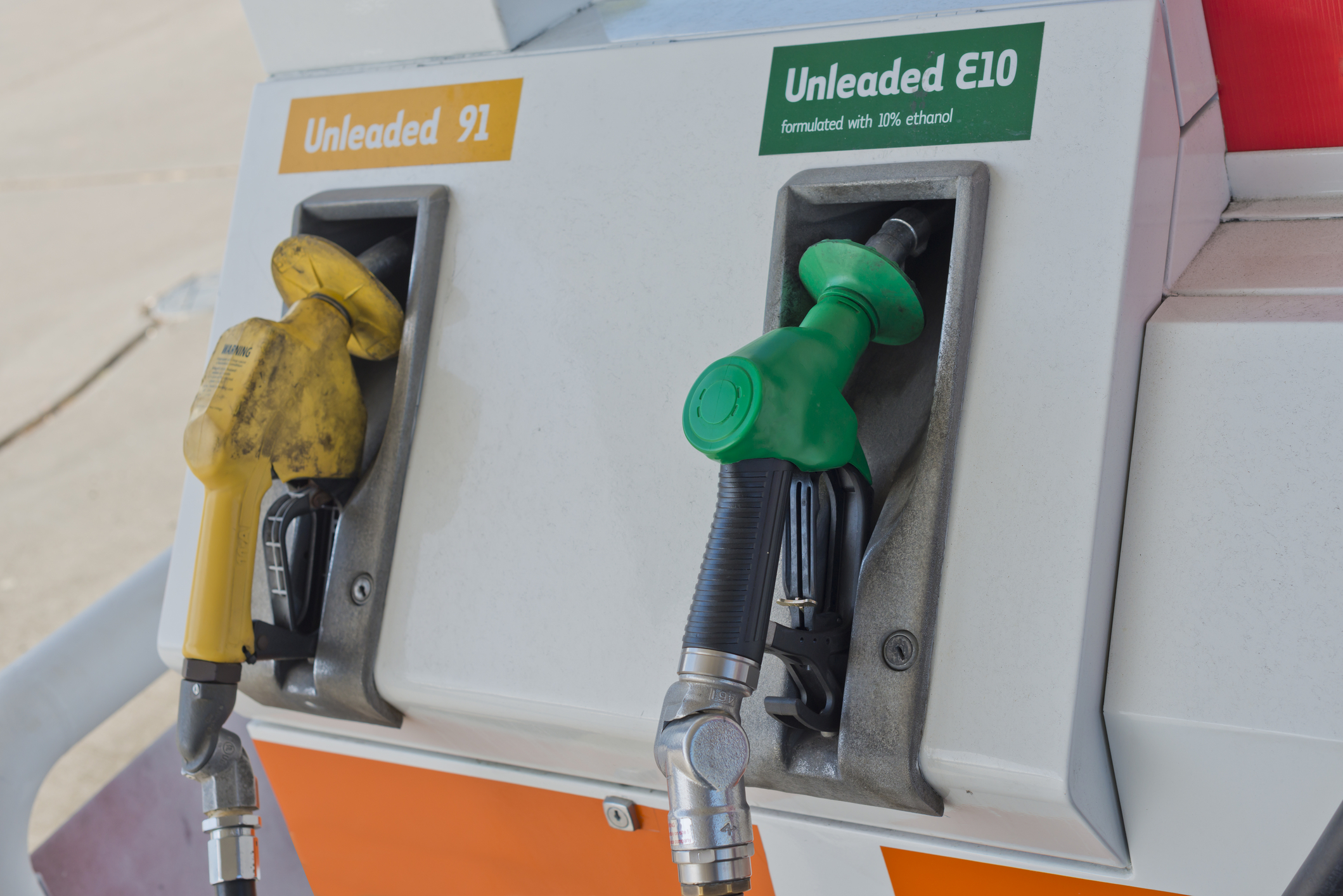 lated into motion – whether that is the forward motion of your car or a pulley that drives the cutter deck on your Countax. Anyone who has ever set light to a brandy soaked Christmas pudding will testify to the combustable potency of alcohol so it is therefore easy to understand how it could be attractive as a fuel for engines.

The number ’10’ refers to the percentage of the mix of ethanol. In this instance, E10 is made up of 90% petroleum and additives and 10% ethanol alcohol. The eagle-eyed amongst you may have noticed that petrol pumps across Europe have long since had an ‘E’ number marked on them – indeed this concept of mixing petrol with ethanol is not new. Up until recently, the standard has been ‘E5’ or 95% petroleum and 5% ethanol.

Why make the change?

The reason for the move to E10 is environmentally driven. As part of the government’s commitment to achieving strict targets for greenhouse gas reduction, a series of initiatives are being phased in to clean up our atmosphere and the amount of carbon we produce. One major contributor to the U.K’s carbon production is exhaust gas from petrol engines.

In theory, ethanol is carbon neutral. Because it is produced from plants, which absorb carbon from the atmosphere as they grow, the burning of the fuel should only release that same amount of carbon that was originally absorbed from the air. There is some controversy over this assessment as the production and processing of plants into alcohol requires a lot of energy, but that debate is not for this blog post!

One government estimate predicts that the move from E5 to E10 could reduce carbon dioxide emissions by around 750,000 tonnes per year. Translated into a more meaningful number, that would be the equivalent of removing 350,000 cars from the roads.

Sounds great, so why aren’t all engines using pure ethanol fuel? Is this not the answer to all of our problems?

It’s complicated, but to put it in simple terms, ethanol contains around 30% less energy than petrol – it’s just can’t deliver the same amount of bang when ignited. What’s more, it’s water soluble (which we will discuss later). This means that it could be more likely to pick up contaminants that may upset some engines. However, the biggest reason is likely scale. Imagine how much farm land would be required to grow the crops needed to produce the ethanol for all the engines in the world.

So what is the controversy with ethanol in petrol?

The recent change to E10 has reignited (pun intended) the debate regarding the use of ethanol in fuel. As previously mentioned, unlike petrol, ethanol is water soluble and can ‘attract’ water from the atmosphere if not properly managed during the production, storage and distribution process. Water in petrol is not good for the performance of an engine. As mentioned, water and petrol don’t mix, so if it becomes present in your fuel tank, the ethanol/water mix can separate from the petrol forming two distinct layers. What’s more, it can also attract contaminants that collect in fuel filters, carburettors and injectors. In small engines that are infrequently used, this could theoretically lead to problems as fuel left for long periods of time could collect more water from the atmosphere whilst it sits around waiting to be used.

Engines that have not been designed for higher ethanol blends could have components made with materials that are not 100% compatible for use with such fuels. On older machinery, components such as seals and hoses could experience faster degradation with E10 than they would running on regular unleaded petrol.

So can my Countax run on E10 petrol without problems?

There is unfortunately not one answer to this question as it depends upon the age and model of your Countax and also how the tractor is used, maintained and stored. However, here are the headlines that should give you a good indication.

If your Countax has a twin cylinder engine and is around 12 years old or less or is a current production model, it is almost certainly fitted with a Kawasaki engine. The good news here is that Kawasaki confirm that their engines will run on E10 fuel with a minimum octane of 91 RON. Most petrol-station unleaded will typically be 95 RON octane and therefore okay to use. However, Kawasaki are keen to highlight that fuel does have a shelf life. If you store the petrol in your fuel tank over winter you could still have a problem. See our top tips on how to look after your machine during the winter period, further on in Countax Life.

Ariens engines are also approved for use with E10 fuel as long as it is over 90 RON. Again, with most forecourt petrol rated at 95 RON, users should not expect any issues.

Depending upon the engine you have fitted to your tractor, the advice from the manufacturer differs. If you don’t know or can’t remember the engine manufacturer of your Countax, consult your operator’s manual or lift up the bonnet and check. All of the manufactures place a brand decal on the top of the engine close to the air inlet.

Here is a summary of advice that should cover most models:

Briggs and Stratton confirm that their engines are indeed compatible with E10 but recommend using a fuel treatment and stabiliser that will help keep your engine in top condition.. Your Countax dealer will be able to source this for you and will be able to advise on how to use it when fuelling your machine.

Some Countax machines built in the early 2000’s used Honda engines. Although compatible with E10, Honda do not recommend its use. Instead, they suggest using ‘Super Unleaded’ petrol which is currently remaining at E5.