Half way around the world in sixty days

We interviewed Gavin Lowndes, General Manager of Steelfort Engineering in New Zealand, about how the company started selling British made Countax garden tractors halfway around the world.

Countax starting manufacturing garden tractors over thirty years ago from its factory in Oxford. Two years after tractor production started, Steelfort Engineering, one of New Zealand’s largest outdoor power equipment suppliers came on board. The relationship has existed for almost as long as Countax tractors have been in production and was a result of both companies’ owners (John McOviney from Steelfort and Harry Handkammer from Countax) meeting at a trade fair. So when Steelfort got into the ride-on mower market, a Countax garden tractor was added to their line-up and remains a popular brand to this day.

Countax was built in Britain for the British garden. A Countax with an optional powered grass collector is able to collect wet grass without clogging as well as being able to leave the quintessential British striped lawn effect. So why are they a popular choice in New Zealand? Well, the New Zealand market is split into territories and has a diverse climate and many different grass types. The South Island, particularly around the region of Canterbury, has countryside very similar to England and the residents also love the striped lawn effect. New Zealand homeowners are very particular about their lawn, wanting a nice finish and the Countax fits their needs perfectly.

The further south you go, the higher the rainfall. A Countax will collect the grass no matter how wet it gets. Because of this, the Countax brand has built a strong reputation over the years.  However, the North Island, including the city of Auckland and further north, have a grass called kikuyu which grows long and sideways and doesn’t always suit the sweeping system of the PGC.

Just like Countax, Steelfort sells its tractors through a network of approved dealers. Currently there are 35 dealers across the country with 12 considered ‘super dealers’. One dealer in particular stands out. A gentleman called Dwain Deveraux, proprietor of Dwains Service Centre, based in Tapanui, a small quintessential rural NZ village with a population – ≤1000 people. Dwain is the most successful Countax dealer in the country. In fact, he has been since day one. In the early days he was selling over 50 Countax tractors a year – a lot of units for that type of product and size of his sales area.

Described by Gavin as a “unique” character, Dwain obviously has a passion for selling Countax.  In the early days of selling, he began producing a calendar each year where every month saw a different Countax owner proudly showing off their machine. He is also one of a few kiwi dealers that have visited the factory in Oxford, U.K. The visit to Countax in 2005 was his first trip outside of New Zealand and was such a big deal for Dwain and his wife, Judith, that the local community organised a fundraiser to help buy them a travel gift so they could get the most out of their trip. Their visit to Oxford is still talked about to this day across both sides of the world with very fond memories and a thousand stories to tell. 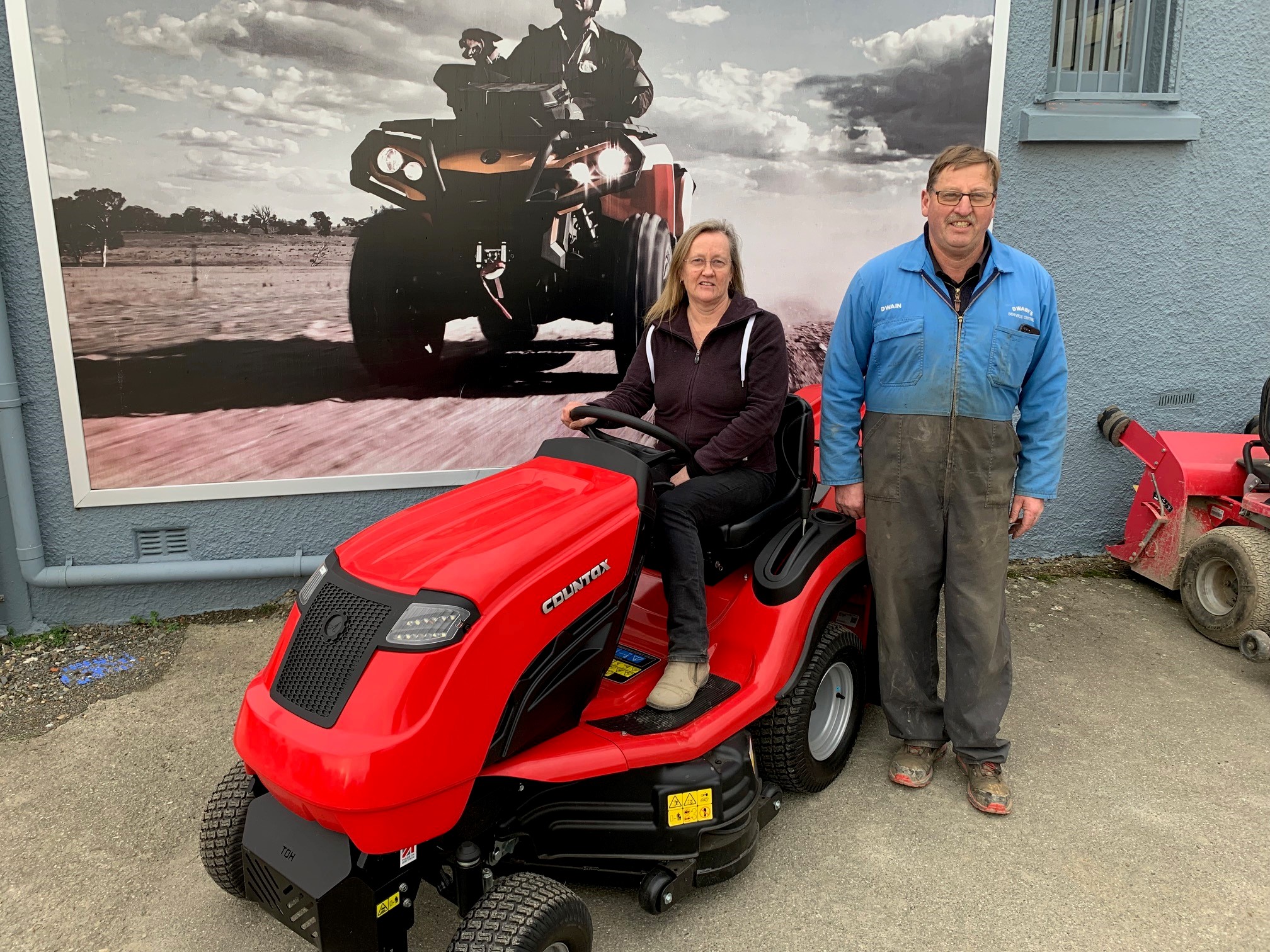 Countax is a unique brand and has a good following – even in New Zealand. The typical Countax owner is similar to the profile of a UK customer – they have a reasonable amount of land and want their lawn and grounds to look its best. They tend to work in the local town but reside in the countryside and enjoy cutting their grass. Hired gardeners are not the norm – people in New Zealand prefer to cut their own grass. The grass cutting season starts in September, with October through to February being the bulk of the cutting months. Just like in the U.K, the C60 remains the most popular Countax model, accounting for the majority of sales.

Countax recently achieved its ‘Made in Britain’ accreditation. We were keen to know if this is a good thing for the New Zealand market. Are “Kiwis” going to buy a product that’s so entrenched in British manufacturing? Gavin sets the record straight that it’s actually a positive thing. British built products carry a great reputation in New Zealand and across the world.

So just how far does a Countax travel to get to New Zealand? About 11,500 miles (about 18,500 kilometres) in distance and on average, two months door to door!

So, who are Steelfort Engineering?

Steelfort is based in the city of Palmerston North, in the North Island and is approximately 1.5 hours from Wellington. Both the company head office and production facility are based there. While the company’s core business is outdoor power equipment it also has a significant commercial products manufacturing base focusing on stainless steel fabrication, anything from sink benches to milk tankers says Gavin, along with commercial refrigeration units primarily for the horticultural storage industry. The company also manufactured walk behind lawnmowers at its plant in New Zealand before recently moving production into China. The company remains a big player in the outdoor power equipment market.

Privately owned since 1946, the company employs 85 people across both sites with the majority being based in Palmerston North. New, larger showroom and distribution centre premises were recently opened in Auckland, a reaction to the growing business and coinciding with their 75year anniversary. Steelfort calls itself the “big little company” and this is reflected in the company ethos. There are a lot of similarities between Steelfort and Countax and they are keen to continue their good working relationship and sell more Countax tractors and accessories! 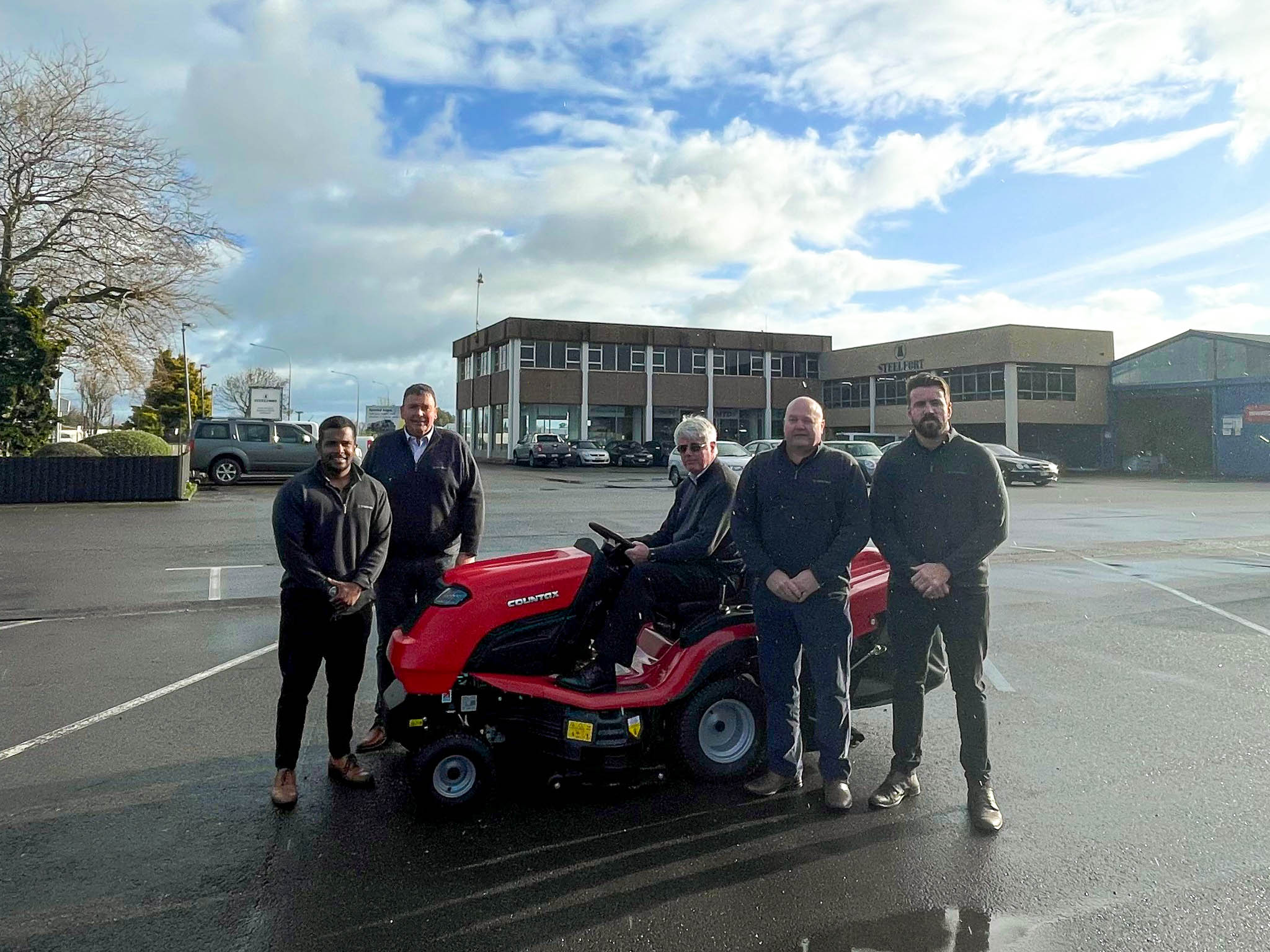 Your information is secure and encrypted.