It is true to say that Britain is famous for many things. However, despite the plethora of inventions, discoveries, artists and cultural influences, Britain remains world famous for three things in particular: The Beatles, Manchester United and rain.

The country’s reputation for wet weather is perhaps a little exaggerated (as is the reputation of Manchester United). Visitors to Britain are often pleasantly surprised how comfortable and long the summer months really are. In fact, a drought in July and August is now more common than not. That said, statistics from NationMaster shows that the U.K. does indeed have the highest rainfall compared to all of the EU countries.

The ‘sunny side’ to all of this rain is the splendid growing conditions it provide us with. As a country, we are blessed with a near perfect mix of fertile soil, moisture and, thanks to the jet stream, pleasantly warm summers. This means that the British gardener can ‘box well above their weight’ with regards to the diversity and quality of plants successfully grown outdoors. This is surprising when considering that we share our latitude with Norway, Sweden and Southern Alaska.

It’s not just border plants that thrive in these conditions. The quality of our lawns means that they are truly in a league of their own. Somewhere in that long list of cultural identifiers, perhaps next to ‘fish ‘n’ chips’ or ‘bowler hats’, is the glorious spectacle of a British lawn. This could be a bi-product of the popularity of Pride & Prejudice, Wimbledon or Wembley Stadium, whatever it is that makes foreigners associate us with grass, it’s true to say that a British striped lawn enjoys a worldwide reputation as being a sign of quality, style and sophistication. Make no mistake, our gardens are the envy of the world. 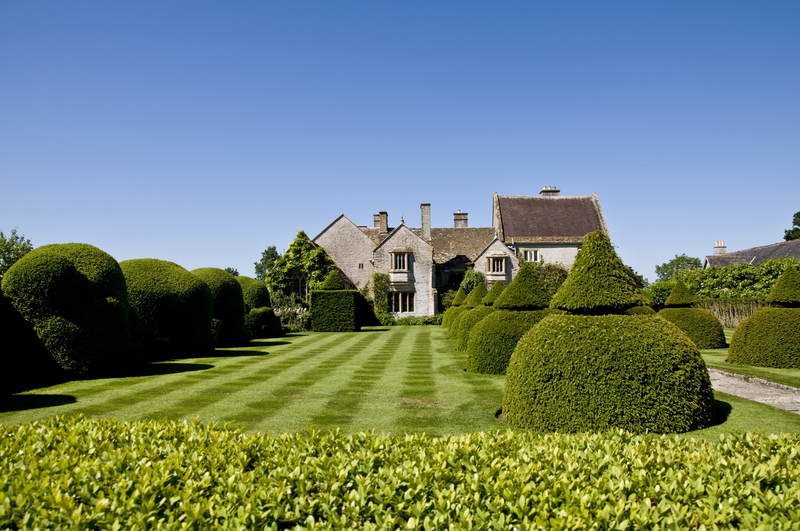 In the U.K., we typically grow a hardy type of ryegrass in our lawns. Growing in the wet and warm conditions of the British Spring and Summer, the plant flourishes – often providing a thick, lush and very green covering. However, this in itself can cause a problem when it comes to mowing.

If you’re a third or fourth generation Countax owner, you may remember what your options were for a ride-on lawnmower in the 1980s and early 90’s. The answer is, not much. Sure there were plenty of machines on the market, but most of them were imported from the U.S. or Italy. In these countries, the grass type and cutting conditions are very different to the U.K. Many famous brands failed to penetrate the U.K. market for one simple reason: it was near impossible to collect grass clippings.

These imported machines were built for markets where customers didn’t care too much about finish. They wanted speed-of-cut and to pay the lowest possible price. Therefore, most of the machines were configured with ‘side discharge’ cutter decks. As the name suggests, once the grass had been cut, the clippings were thrown out of the side of the deck, dispersed over the area just mown. Fast? Yes. Cheaper to make? Much cheaper – but not a very pretty finish – and not very good for your lawn’s health either.

Us Brits love our gardens. For many of us, the idea of having loose grass clippings blown all over our lawn and flowerbeds leads to quivering upper lips and night sweats. As it was, mower importers failed to get a foothold on the British market. In reaction, they fitted ‘baggers’ to their products – big boxes mounted to the back of the ride-on mower with a huge plastic pipe protruding from the side of the cutter deck. The idea was that the clippings would be thrown out of the side of the deck and ‘blown’ around the tube and into the box. 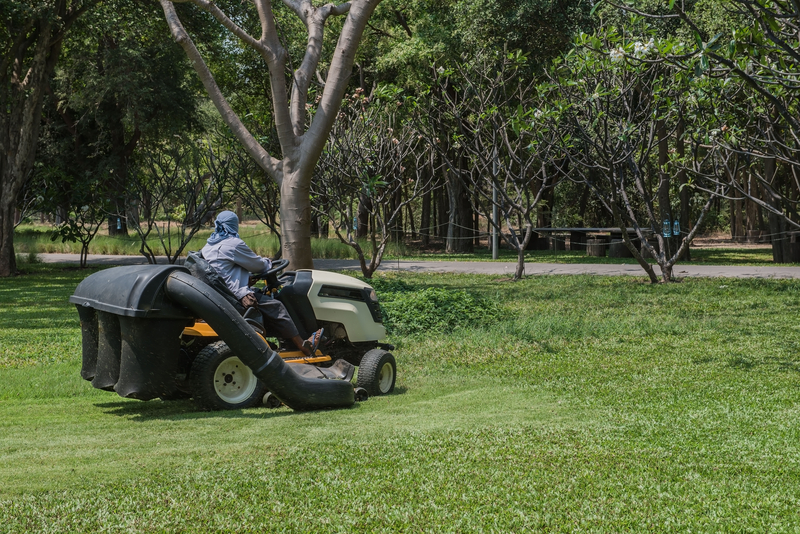 Not only was this solution incredibly ugly and cumbersome (many a tube and box were damaged trying to negotiate around a tree or whilst reversing into a shed), it also doesn’t work well on British lawns.

These systems, which are still popular in the U.S.A, rely on the fact that the grass being cut is dry. Having a low moisture content makes the clippings light weight and easy to blow up through the discharge pipe.  However, try cutting our thick, lush and (more often than not) wet grass – well… you can probably guess what happens. In the 1980s, British garden machinery dealers coined the phrase ‘green arm’ to describe the physical condition brought about by buying one of these systems. Customers stained their arms greens from the wet grass, as well as testing their patience with the constant unclogging of the discharge chute, deck and bagger.

It was in the 80s and that our once competitor (and now sister brand), Westwood, figured out how to fix the problem. However, it was not until the birth of Countax in 1990 that the solution was perfected. As such, both of these iconic British brands went on to dominate the market for the proceeding decades.  This is quite possibly why you own a Countax today.

Rather than using air flow alone, the Countax utilised mechanical collection for the clippings. Our engineers figured out that a rotating brush would sweep and ‘flick’ up the clippings into a collection bag. It didn’t matter whether the grass was wet or dry. As there is no chute and no requirement for air flow, there is nothing in the system that can clog up.

This Powered Grass Collector (PGC) was an instant hit. For the first time, customers previously resigned to mowing their lawns with walk-behind cylinder mowers, had a viable ride-on alternative. 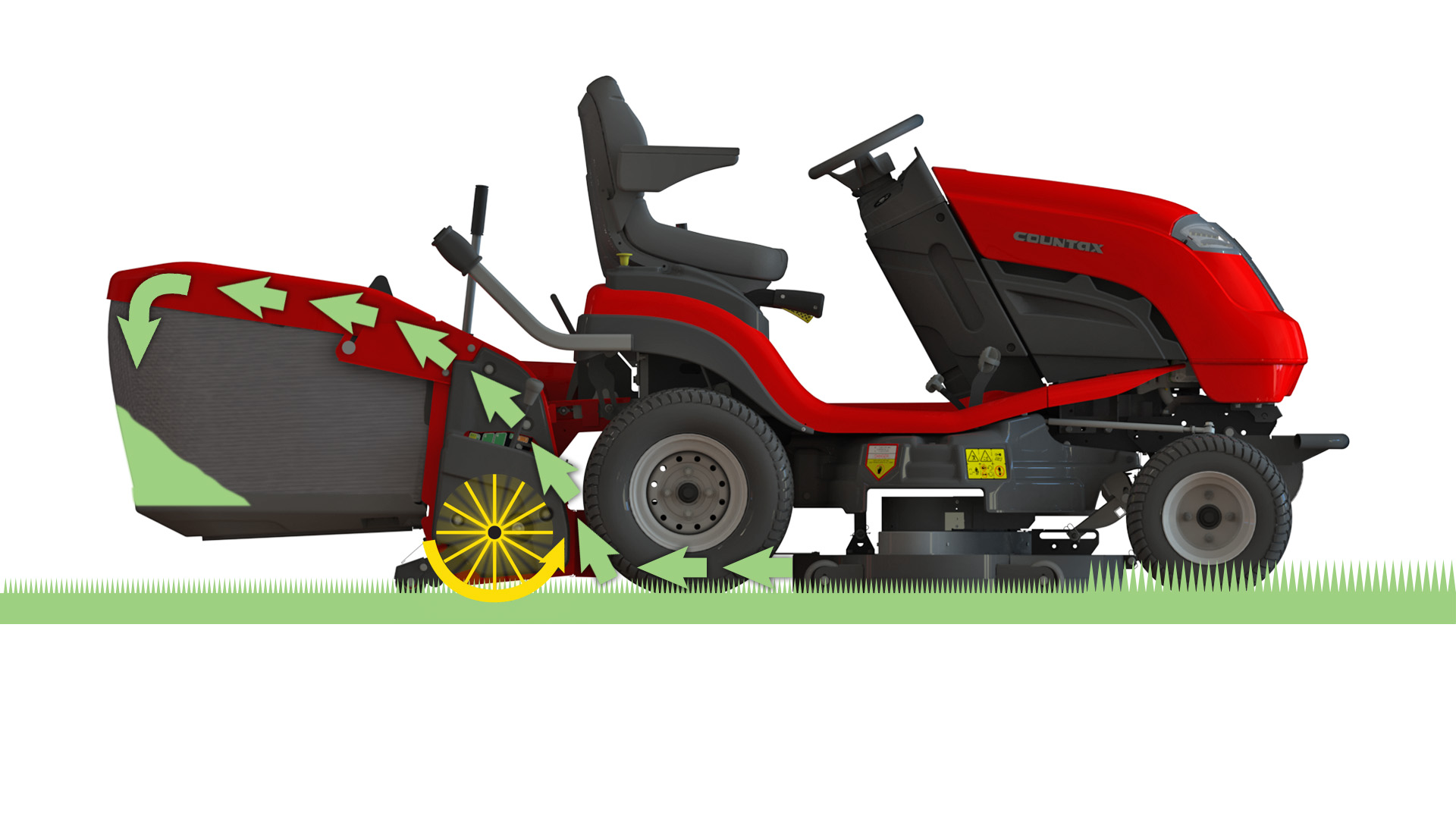 As it happened, this system provided a couple of other benefits over competitor machines. Firstly, as the brush is mechanised, it requires a power source. Countax achieved this by running a power take-off, essentially a pulley, located under the seat, that pulled the drive from the tractor’s engine and controlled it via an independent clutch. For the first three iterations of the C Series, a manual engage lever was used.

In 2014, the new Mk4 C Series introduced an electric clutch, providing push-button control for the first time. Early on, it was quickly understood that other attachments could be fitted to the tractor by utilising this system. Countax introduced multiple accessories including the powered scarifier, a broadcast spreader and, the now out of production, chipper shredder. These attachments are relatively cheap compared to the standalone alternatives – after all, much of the price of a powered scarifier is the cost of the engine – why not utilise the more powerful engine you already own in your garden tractor? The second benefit comes from the fact that the Countax tractor is ground engaging. Unlike almost every other collection system, where the collector is mounted to the back of the tractor, lifted up off the ground, the Countax PGC is independent. It has to be to allow the brushes to sweep the ground at a consistent height. Countax engineers seized the opportunity that this provided, integrating a lawn roller into the design of the machine. The double action of the brushes sweeping up the blades of grass in one direction, then rollering them down in the other, means that the Countax could produce lawn stripes whilst it mows.

Even to this day, this is a system unique to Countax (and Westwood).  Should you wish to achieve this result with a competitor machine, be prepared to purchase an additional ‘striping kit’ or roller – both of which will require another job for another day.

It’s clearly preaching to the converted to state that a Countax certainly does provide the best overall value for money – even though it has a slightly higher up-front cost. As some reading this article will testify, most of those Countax tractors built in the 1990s and 2000s are still happily working today.

So it is that there is perhaps one other cultural identifier that we forgot to mention earlier. Despite what some may have you believe, ‘Made in Britain’ is still a prestigious mark across the world.  As a country, we hold a reputation for finding innovative, sturdy and ingenious solutions when others cannot. The Countax PGC is, in this writer’s mind at least, such an example of British engineering at its best.

Your information is secure and encrypted.